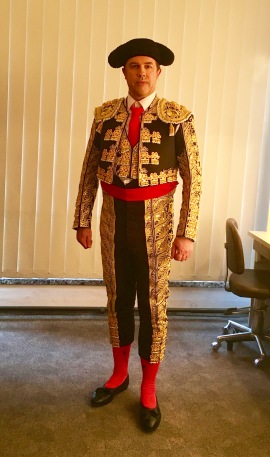 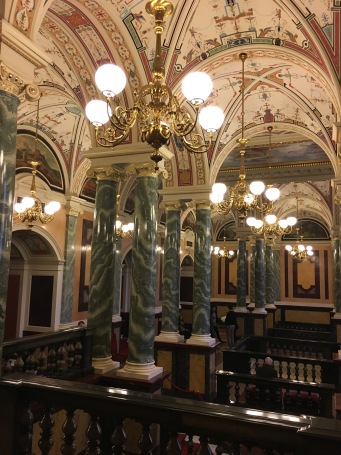 I’m now home after 2 weeks at the beautiful Semperoper in Dresden where I sang 3 performances of Escamillo in Bizet’s Carmen. It was my third visit to this amazing Opera House but the first time I actually sang on stage.

The first time, back in 2013, was to sing the role of the General in Henze’s great anti war opera “We come to the River”. In the production the whole orchestra pit, stage and part of the stalls were taken over to staging. There were 3 orchestras and 50 soloists – a truly surround experience for the audience. The second visit was for concert performances of Guntram by Richard Strauss, so finally I made it onto the traditional stage with Carmen.

The first thing to say is how great the acoustics are. You can here the voice pinging around the theatre and it’s a wonderful feeling. The production was quite traditional (which is unusual for Germany!) and the cast made up from members of the excellent house ensemble and a few guests. Alejo Perez conducted the performances, Kate Aldrich sang Carmen, both making their Semperoper debuts. Arnold Rutkowski and Emily Dorn reprised their roles of Jose and Micaela.

Performances went well. I used to sing Escamillo a lot, with more than 50 performances between 2004-8, but I hadn’t sung the role since then. A new matador costume was made in Madrid for the final entrance and I just about managed to squeeze into it.

My Blog on the Mental side of Performing – “The Singing Brain”  is on my blog page.  The Calendar is now updated to show the 2021/21 season.